Redox: The answer to aging and degenerative diseases.

“ All of our health problems are due to cells that are unable to maintain a healthy Redox potential” Dr R.Ward

Bio-chemical reactions that produce energy and new cells are complex processes that take place continuously in our body, or rather in your cells. The cells contain mitochondria, which are biochemical factories that allow countless biochemical reactions to take place every second. Food and oxygen are converted into energy, CO2 and water. Did you know that the electrical potential in your cells is of great importance? Redox signal molecules play an important role in maintaining the electrical voltage (potential). Do you suffer from rusting (heavy metals, overweight, candida) or inflammation (asthma, allergy, Lyme, cancer)? Then read on quickly.

I will take you along in the explanation about these particles, which two major processes cause the body to age and which diseases can arise due to a lack of them. Anyone can improve this fundamental process. There is a supplement that structurally increases redox signal molecules in your body so that cells can function optimally again.

Redox is the contraction of reduction and oxidation, a chemical reaction in which an electrical charge in the form of an electron is transferred from the reductor to the oxidizer. This principle is used, for example, in batteries and accumulators. Rusting is also a redox reaction, in which iron (the reductor) oxidizes. A redox reaction can be any reaction between two oppositely charged particles, for example in salts such as sodium chloride, magnesium oxide or zinc orotate.

In your body these kinds of reactions take place continuously and a potential is created: an electrical voltage. That is the electrical “tone” (comparable to muscle tone) that cells must have with each other to get one substance into another cell or to get it out of it. Very useful when you consider that in this way heavy metals and toxins can be removed from your body and on the other hand the body can be optimally nourished. As Doctor Tennant wrote in his book of the same name: HEALING is VOLTAGE. In other words, our cells benefit from a good redox potential, which in turn depends on the amount of redox signaling molecules. Muscle cells, especially those of the heart muscle, have considerably more signaling molecules than connective tissue. The heart muscle always works.

When you think of oxidation you usually immediately think of a reaction with oxygen (oxygen). Oxygen is therefore a strong oxidizer. Now oxygen is the most abundant substance in your body, along with water and nitrogen. Water is the conductor and sensor and oxygen is the reactor. We know the oxidation of iron as rusting. Oxidation in the cells (oxidative stress) reflects a similar process that causes your body to age slowly. A bad redox system in your body or a redox reaction with toxins or heavy metals (such as mercury and cadmium) produces damaged cells. When this oxidative stress becomes chronic, it directly leads to aging and dehydration. But mental stress, poor nutrition, little exercise, and little fresh air or sunlight make this problem worse

Redox signal molecules have the special property that they can reduce (lose electrons) or oxidize (absorb electrons). They regulate, among other things, the redox potential in the cells. A good redox potential in the cells is of primary importance for a healthy body and is the basic condition for proper functioning. All health problems are due to cells unable to maintain proper potential. This is reflected in diseases that arise after a mental / physical trauma in combination with a shortage of nutrients (vitamins, minerals), an excess of toxins (fine particles, protein particles, heavy metals) and possible accretion / invasion of pathogens (viruses, bacteria). , fungi or parasites).

Illness due to a lack of redox

There are two common causes of disease, including all other known conditions. That is oxidative stress (rusting) and inflammation (inflammation). Oxidative stress involves an accumulation of waste in places where it should not be. When heavy metals accumulate in your brain, cognitive disorders arise. When the walls of the blood vessels ignite, cholesterol comes to muffle the fire. This accumulation of cholesterol is a form of oxidation.

Inflammation involves free radicals that cannot or only partially be made harmless. In the case of rheumatism, the joints always become infected due to a lack of antioxidants that scavenge free radicals. Restoration of the redox potential may alleviate the complaints. With a viral or bacterial outbreak there is visible inflammation (cold sore, psoriasis). Recovery of the redox stimulates the self-healing ability.

On the other side of the coin are the conditions with a reactive inflammatory nature, mainly caused by chronic low-grade inflammation, such as:

Oxidative stress and inflammation can also take place on an emotional / mental level. Fears, depression and worse are manifestations of inflammation or oxidation of the brain itself or of the organs in the trunk that send a disturbed signal to the brain. A good example of this is a reduced serotonin production in the intestines due to inflammation, which leads to a deficiency in the brain, possibly leading to depression. Serotonin reuptake inhibitors are then regularly given to keep the little serotonin in the brain functioning for as long as possible. This is not a solution because the inflammation in the intestines is not addressed.

Electrons and ions: the antioxidants 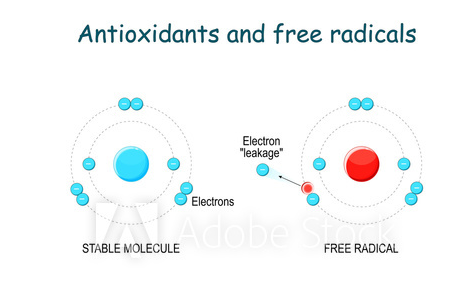 Electrons are the smallest particles that revolve around the nucleus of an atom and carry a negative charge. Ions are particles (atoms or molecules) with a charge: there are either too many or too few electrons. Substances that have an electron surplus are substances with an antioxidant effect. Examples of antioxidants are:

With the current way of life and the chemicalization of the food, the number of free radicals in the body increases. If you are stressed, it costs you vitamin C – to put it bluntly. If you breathe in particulate matter, if you eat too much sugar and bad fats, it will cost you a buffer of antioxidants in the body.

Redox signal molecules, which you can add as a supplement, ensure a continuous availability of antioxidants. They also aid in methylation: an equally important process in the body that stands or falls when there is sufficient voltage in the cells.

I can no longer emphasize that cell tension is as important as muscle tension. If the muscle tension disappears, you will feel weak on all fronts. At the cellular level, the voltage has literally drained from your cells. You can call this acidification after intensive exercise or feeling bad when you are under stress. It’s all about the same thing: the loss of natural electricity in your cells, making all biochemical processes worse.

What can you do yourself?

Cell voltage or the cell voltage, the force that a cell can generate, depends on redox signal molecules. There is a new supplement on the market with very interesting possibilities for people who think that the current treatments regular or complementary do not yield enough results. Possibly the recovery of the Redox is the determining condition of the body for dealing with disease on its own. Because the latter is what should be strived for by every human being: Stimulate the self-healing ability and the miracles are not yet out of the world.